As mentioned over on Github I am fiddling with spatial models a la: https://becarioprecario.bitbucket.io/spde-gitbook/ch-intro.html#sec:intro

Below is the code I could come up with inspired from: https://mc-stan.org/docs/2_19/stan-users-guide/fit-gp-section.html:

Which does no work as I get the following error: “Error: cannot convert objects with missing or infinite values to greta_arrays”

Browsing through the greta forum this could be an interesting place to start.

Yup, you can definitely do GPs, that’s one of the main reasons I originally wrote greta! There’s a prototype extension package https://github.com/greta-dev/greta.gp to make these models easier, but it’s currently halfway through a refactor and doesn’t work with the current version of greta. Hoping to polish it off soon, because it’s a nice example of the sort of simple interface you can create with an extension package.

The reason your code isn’t working is that you are passing greta arrays into a bunch of functions for which there aren’t yet greta equivalents: ifelse, besselK, and base::gamma. Bessel K and gamma functions could easily be added to greta (once I work out what to call the gamma function without it being confused with the distribution), and I could probably get ifelse to work.

However, I never usually work with the full Matern covariance, because nu is really hard to estimate from data. This full version of the Matern covariance can’t be fitted in INLA either; nu has to specified. It should definitely be possible though, so let me know if you really want that and we can work out a covariance function for it.

Fit Matern GP with the linear predictor approach as in your code. Note eta needs to be a length n vector, you need to matrix-multiply it with L_K, and R’s chol() (and therefore greta’s) actually returns the upper triangular matrix, so needs to be transposed to get the lower triangular matrix. I use the one_by_one argument to greta to deal with Cholesky decomposition failures with bad parameter sets.

This parameterisation has a latent Gaussian process, and then the data are observed with additional error on top of that GP. Since the response is Gaussian in this case, it’s much nicer to reparameterise as having the data drawn from the Gaussian process but with extra marginal variance. Which is actually how you simulated the data. Note this won’t work with non-Gaussian observation models

The following does away with the eta parameter, doesn’t need jitter to be added to the kernel, and samples much more nicely:

OK, I figured now was the time to get greta.gp working.

There’s a new branch and pull request open which depends on greta 0.3.1, which is itself still a release candidate (waiting on CRAN to accept) and pull request. You can install both by doing:

Hopefully these will both be the master branches (and on CRAN, for greta) in a couple of days so those installation instructions will become redundant.

Here’s how you would do the same two models with greta.gp:

A nice thing about this is that you can use greta.gp::project() to get a greta array for GP values in new locations, and greta::calculate() to get posterior samples for them. So you can easily do Gaussian process prediction to new locations even if you didn’t know the prediction locations before sampling.

That only works with the first one of these examples though. You have to do prediction yourself for the latter case (observed GP with noise):

Oops, moving too fast! Accepted on CRAN now, so you can do:

Wow thanks a lot for the super fast response and happy to hear that this is integrated in an already developed package. I’ll have a try.

Should the second line rather be:

Yes it should, thanks!

Ok, I tried this a bit and the code works fine, yet I get quite some bad mcmc sampling for the model parameters. I tried increasing the warmup and sample number to 4000 but the chains still look less than optimal (divergent iterations). 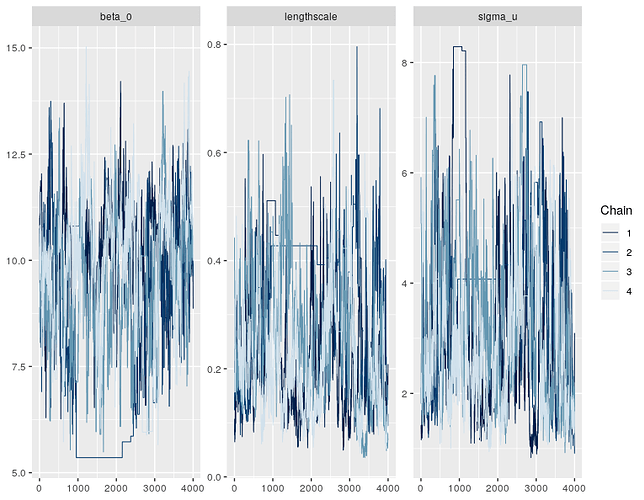 Do you have some tips on how to improve the sampling for such model?

what was the code that produced this?

I just retook the code you wrote earlier:

Right, it looks like the posterior for this model has an awkward geometry, so the sampler is getting a bit stuck in some points. This isn’t very surprising for GP models - there’s often some non-identifiability in the parameters, e.g. between the lengthscale and variance components. Or between the GP and the intercept.

Two options here, the most general one first, then a GP-specific one second:

You can make the sampler more effective (less correlated) by increasing the number of leapfrog steps, L. Unlike NUTS (Stan’s default sampler), the HMC algorithm in greta doesn’t tune L, so the user has to specify it. The default value (uniformly sampling L between 5 and 10) works well for models with simple geometry, but probably needs to be increased here. Try:

It’s annoying to have to do this tuning for models like this. There’s a development branch of greta that implements NUTS (using a development version of tensorflow probability), though for annoying computational reasons it’s less effective than HMC on less-complicated models. I have a plan to implement tuning of this parameter during warmup, but it’s not trivial and not very high on my to do list. A simple thing we could do quickly (after NUTS is ready to be released in greta) is implement a self-tuning HMC that runs NUTS during warmup, records the distribution of leapfrog steps it takes, then uses that number of leapfrog steps during sampling with vanilla HMC. But manual tuning of L is the most practical solution for now.

BTW, I gave the experimental NUTS sampler a go on this model, and it didn’t do quite as well as vanilla HMC with the L parameters I suggested above.

The ML approach to Gaussian processes has some nice features, like the ability to create new kernels by adding and multiplying other kernels. Ie. adding functions together, which implies adding together the resulting variance covariance matrices. See the kernel cookbook for some nice illustrations and explanations.

greta.gp supports this approach to designing GP kernels, so you can define something crazy - like a linear regression with (smoothly) temporally-varying coefficients, plus a spatial random effect - in 5 lines:

you can also pull out the separate components of this GP, by projecting it using only one of the component kernels

E.g. to fit a model (in this case just the prior) and plot just the temporal effects (which gets multiplied by the environmental linear model) you would do: 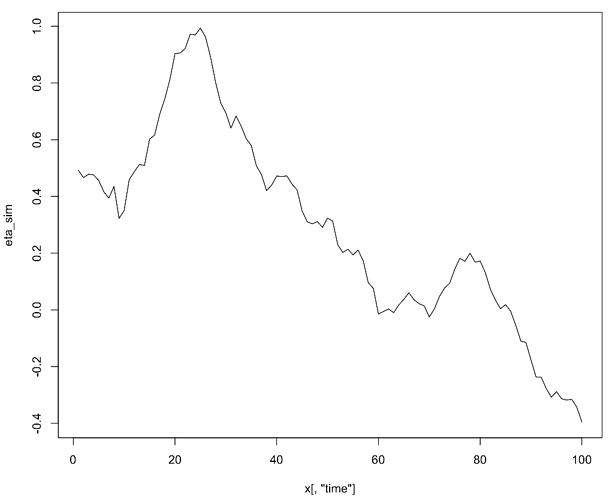 Sorry, that got a bit involved and off topic. Been a while since I played with compositional GPs and got excited.

The interesting thing here though is if you represent an intercept (with normal prior) in the GP ( via the bias() kernel above), it marginalises that parameter. The intercept is a priori Gaussian, and the GP results are a priori Gaussian, so it can combine their variances to get a Gaussian distribution over their sum. That means you don’t need to explicitly model beta_0 at all, it’s taken care of by the GP. You can do:

This samples much more nicely, because the geometry is less wacky. You can do the same trick for linear components in the model with the linear kernel.
To extract samples of beta_0 you can do:

Using the bias kernel approach, and increasing L a bit would probably be a good idea

Wow, thanks a lot @nick for this very detailed answer, it’ll take me some time to digest it (especially the marginalizing part), but I’ll come back shortly with some news on my exploring journey in the magical GP world.

Haha, yep. If only I could write papers one forum response at a time, I’d be much more productive

Ok, this is all pretty new and exciting for me. I tried to explore this a bit closer to the model I have in mind. And I have a couple of questions. But first the code I used:

The idea is that we want to model the effect of temp and rain with some spatial dependency.

I do get quite some awful-looking traceplots: 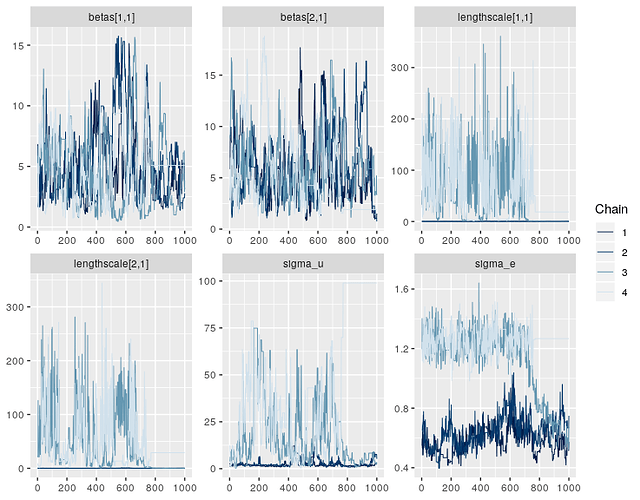 I start to feel the magic.

Quick answers as I’m on my phone:

Thanks for your swift answer, applying your suggestions did the charm, I know have nice looking traceplot and good gelman.diag output. I’ll continue my journey to pull out all the needed infos from the fitted model.

Thanks for your patience!

Ok, the spatial models on simulated data now fits nicely but when I try to extract the estimated spatial field I get weird results: predicted values only vary along one dimension …

The code I used: 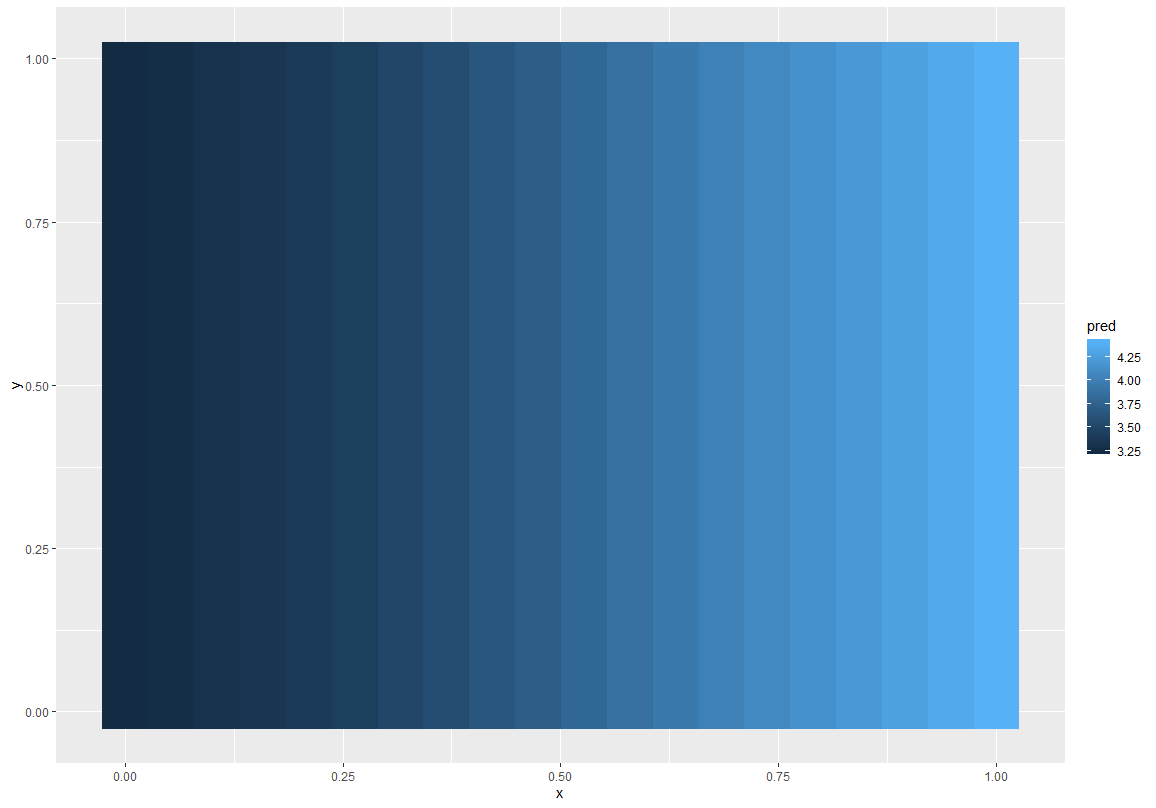 Which is not what I would expect, if we check the original point to see what spatial patterns there is there: 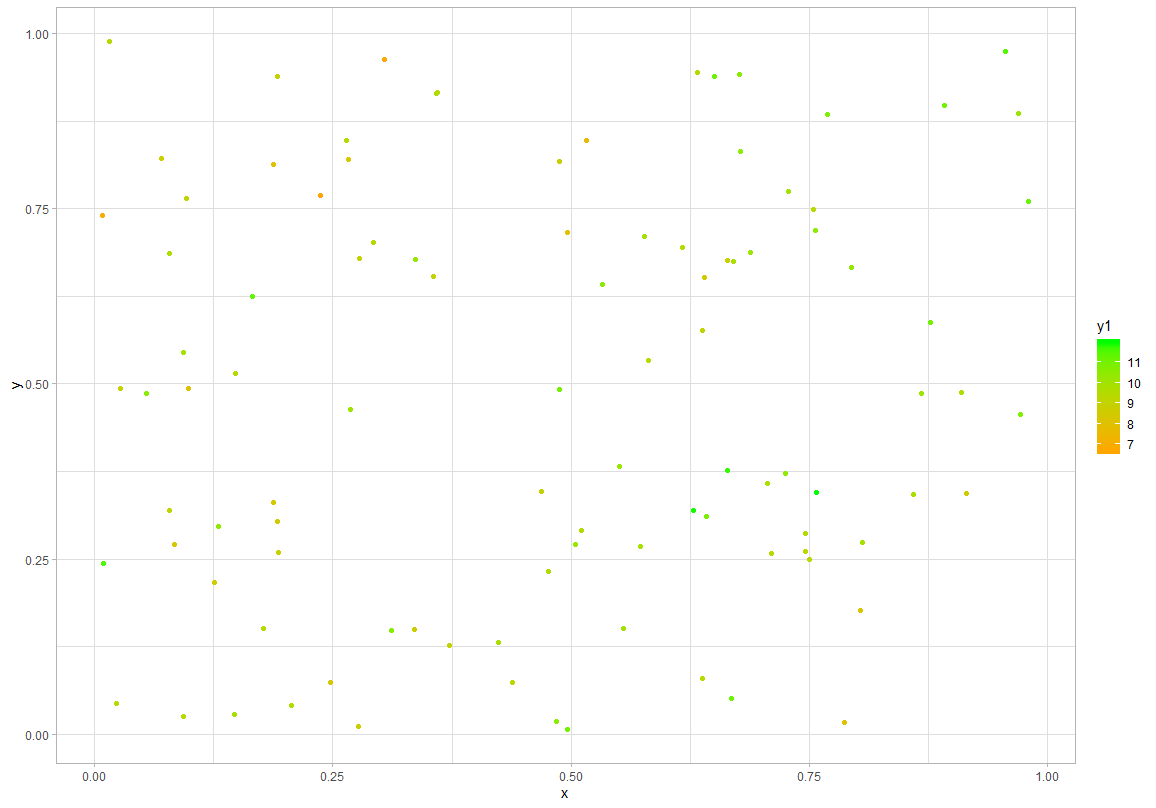 What am I doing wrong?

Your code doesn’t run for me - it errors because you added the response values to xy and passed that in as the space of the GP. I’m guessing that was not how you ran it when you got these results, but you added that in to help with plotting, so I changed it to:

Then I get the same result as you.

I think the issue here is that you only passed in one lengthscale to greta.gp::mat32, which it interprets as meaning only the first column in the matrix (the x axis) is to be modelled. greta.gp’s matern 32 is non-isotropic by default, so it expects a vector of lengthscales. If you want an isotropic version, you can do: 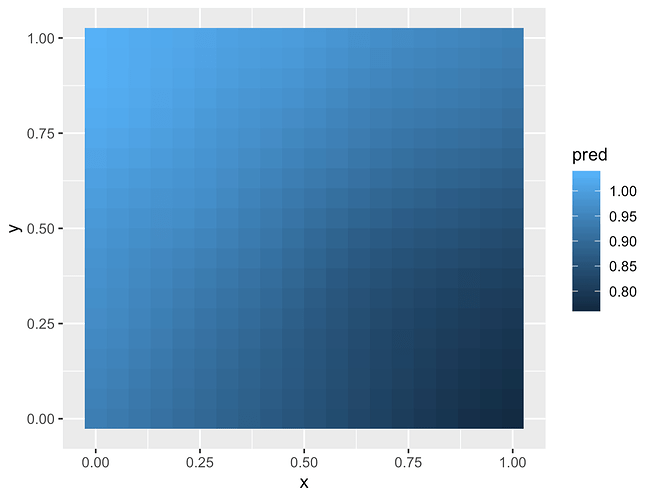 I hadn’t realised that it was silently ignoring axes for which no lengthscale was provided, and that documentation about the argument is vague. I’ll open an issue about this now - we should add a warning or an assertion to catch this unexpected behaviour.

I am starting to fiddle with spatio-temporal models using greta.gp and am encountering the issue that I get a lot (100%) of bad propositions during warmup and sampling.

Here is the code used:

The object dat is a dataframe with 4 columns (x, y, time, count) obtained from simulated data.

Is there something wrong?

I tried to look at:

As mentioned in the online documentation but I always get the same values out if I change the hyperparameters. Is this what is causing the problem (flat likelihood surface)?

calculate() would just be giving you back the data values of y with these inputs. If you want to simulate values of y you can install the latest GitHub version of greta and do:

to get 10 simulations. Or to fix values for hyperparameters e.g.:

The online documentation refers to the version of greta that is on CRAN, so refer to the installed docs for the development version.

I just had a play with this on some fake data (so YMMV) but it looked like switching the temporal kernel to mat32 removed all the bad samples. Not sure why that would be or whether that’s your issue…